Founded by the late Malcolm Archer, Frankley Bowmen proudly opened it’s doors at Lutley Community Centre. As one of the first community gatherings for mixed discipline field archery in the West Midlands, we quickly became a familiar name amongst archers from clubs all over the UK. Now we reside at Redhill School sports hall, we’ve grown a little older and wiser but we still run the club as Malcolm intended it to be run, a friendly, non-judgemental place for archers of all skill levels to come and practice the sport they love. 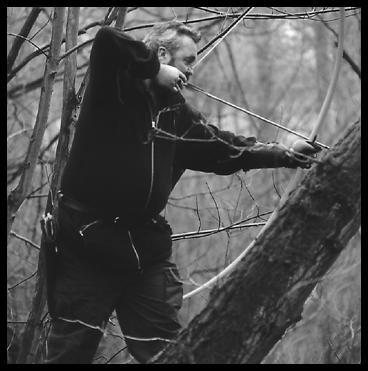 It’s difficult to describe Malcolm without making him sound like the perfect gentleman, husband, father and friend, but to me, and many people who were fortunate enough to know this larger than life character, this is exactly what he was and just to put the icing on the cake, he was the most naturally talented archer I have ever known.

The archery world, I suppose, would remember Malcolm, Elaine, Ian and Samantha as the family who managed to turn up at shoots usually about ten minutes before the start, and as ever, the unflappable Malcolm would come walking up to the registration tent with that beaming smile of his as though nothing was going to start until he got there, a habit he would never lose as long as I knew him.

There are lots of things we remember about the people who mean a lot to us through the years, and I could tell you of many stories about the ‘big fella’, but there is always one thing he did that always amazed me. He had this ability to be able to shoot any bow at any time, whether it be a compound, recurve, longbow, it didn’t matter to Malcolm.

The times I have been with him at shows and club nights where an archer has been struggling to hit the target, and in their wisdom gave Malcolm a call to ask his advice. Now anyone who knew Malcolm knows full well he hadn’t got a clue how to set up a compound bow, he just “shot it” as he would say. However, he would listen to the archer telling him the problems that he had with the bow, he would then say “Here, let me have a go with it”, then proceed to draw this bow up that was four inches too short for his gorilla arms, anchor with his thumb knuckle on his nose, take aim and the arrow would appear in the middle of the kill. He would then pass the bow back to the very embarrassed archer and say, “Seems alright to me”, then turn to me with a huge grin and give me a cheeky wink. I have lost count how many times he has done that, but he gave me many a funny moment.

This man, as many people know, was – and still is – Frankley Bowmen Archery Club. I was with him the first night at the club, with a Malcolm-made cardboard boss in a 15 metre hall with just five of us shooting. Happy days they were, but little did I know at the time what kind of man I would in time come to admire, trust, look up to and would always look for his approval. He has brought so much to the archery world I cannot put it all in this tribute, but what I can say is, without Malcolm Archer I would not be the person or the archer I am today. Frankley Bowmen would have never been as recognised as it has been without his continuous hard work, time, money, and above all else, passion, for a sport he loved more than any other.

I’ll finish the same way I started, Malcolm Archer to me was the perfect gentleman, husband, father, friend, and archer, and will be missed by more people than I can imagine. 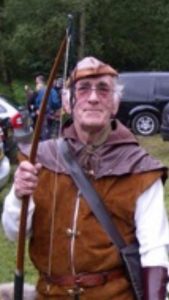 A Gentleman… Just one word that sums him up. He was the kindest, most thoughtful, unbelievably generous man I have ever had the good fortune to meet. Absolutely nothing was too much trouble.

Giving his time selflessly for the enjoyment of others, I’m sure many of you will remember him, welcoming wannabe archers to the club, hoping a few would be infected with the love that he had for his sport. His burning passion for recycling and up-cycling, often started with only the soles of his boots visible as he skip dived to rescue a particular “treasure”, fashioning leather items sliced from the backs of chairs and sofas left outside… I’m absolutely certain that some had only been put outside whilst the carpet was cleaned!

Small in stature but a true giant of a man, and our club is perfect evidence of his tireless commitment to improve, not for glory or recognition, but for the enjoyment of others. His efforts, along with that of his gang of helpers, will forever be his legacy… Those are going to be some very big shoes to fill my friend.

To me, an amazingly good mate, with a fantastic sense of humour and a smile that usually meant there was fun and impending mischief to be had in the near future. After we’d had a cuppa or two and a biscuit first of course. Hutch you inspire me.

Unsurprisingly, you know, I never heard him speak a bad word about anybody. But that was just the way he was.

To his family – you were very privileged to call him yours – Thank you for sharing him with us.